What’s going on with the price of gold in Australian dollars?

The difference between the two is simply the difference in the value of the currencies that gold is quoted in.

This move has been fairly sudden and has brought us closer to the trend line, so gold prices in AUD should be expected to move in closer lockstep with gold priced in other currencies going forward.

It’s worth noting that despite the large rally in the AUD, gold has very recently reached all-time highs in many currencies, including the Australian dollar. Many analysts expect that once the all-time U.S. dollar price of $1917 per ounce is reached then the next leg of the gold bull market will begin. 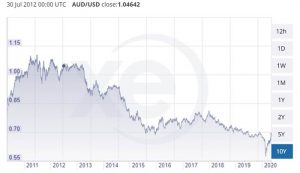 Bringing gold to the digital age – Interview on ausbiz