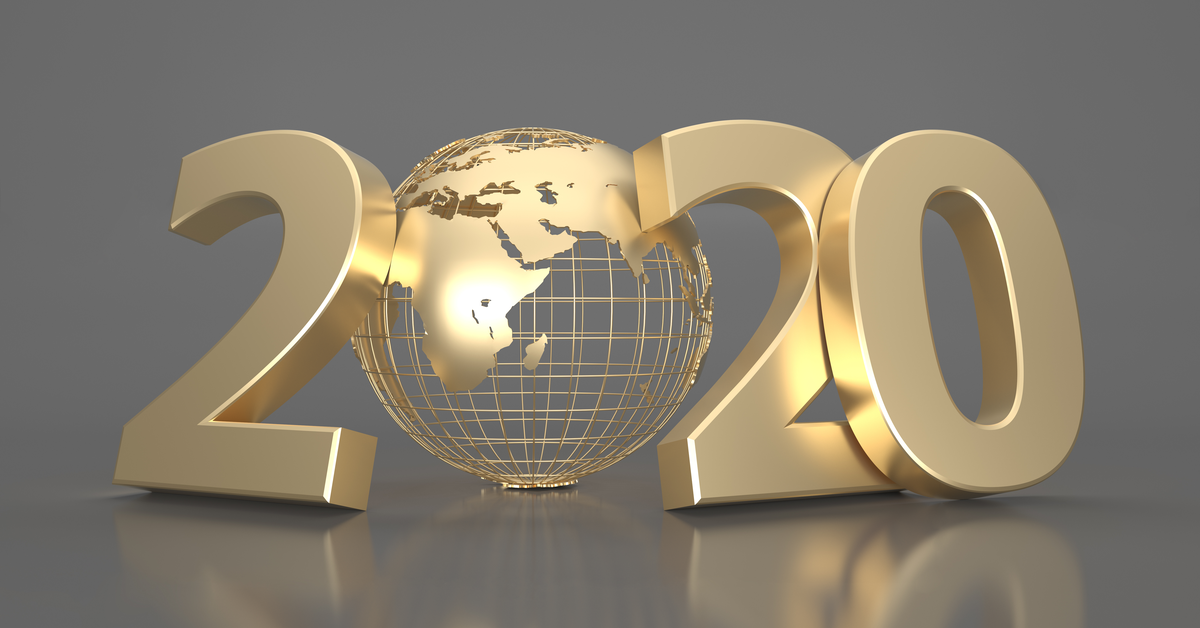 With a new year and a new decade upon us we think it’s time to discuss our outlook for gold.

Gold is simultaneously a commodity, a currency, an investment, and a hedge against political uncertainty, so a look at each of these influences may provide some insight into how its price might react in the coming year.

On the commodity side gold is used in jewellery and industrial applications and according to the World Gold Council global jewellery demand has been steady, so we would currently count this as a “neutral” influence. Commodity demand tends to reflect overall economic conditions and growth rates.

On the currency side gold competes with bank currencies, and it’s no secret that central banks have struggled over the last decade to maintain the integrity of their national currencies. The single biggest indicator of these struggles of course is the price of money, expressed as interest rates, and around the globe interest rates are effectively at (or even below) zero.

When something is priced at zero it is sending you a signal about its value, and while of course you can still exchange currencies for (fewer and fewer) goods and services, we do wonder how a debt-based currency system will  operate going forward if lenders are to receive nothing in exchange for extending credit.

The short-term answer seems to be that entities without underwriting expertise (central banks) must be willing to put risk on their books regardless of the borrower’s ability to repay, but there are limits to that approach.

The U.S. Federal Reserve Bank is well aware of these limits and flirted briefly in 2018 with reducing this form of life support for the financial system by shrinking their balance sheet. They reversed that policy in short order when billions were lost in the share market as a result.

The U.S. required $1.9 trillion in new debt issued in 2019 in order to keep the lights on, and more than 70% of that was issued with a term of 6 months or less. In “normal” times the USG would fund itself primarily in the 10- and 30-year bond markets, so this very short duration borrowing (bleeding into the overnight markets, where the Fed has stepped in with more than $3 trillion in support in the last 3 months) is an ominous sign.

So if the U.S. Dollar is gold’s competition (which it is) then the competition is looking fundamentally weak indeed.

Signing up to the currency wars recently with a “quantitative easing” (QE) program of their own has been the Reserve Bank of Australia, who do not seem troubled by the analysis of the IMF and the World Bank, and the opinions of the CEOs of the four largest banks in Europe, who have said that QE and negative interest rates “destroy the banking system”.

In a currency war you seek to lower the value of your currency in order to make your exports cheaper. Stated differently, the strategy is to try to make your country richer by making its citizens poorer.

In response to the RBA’s actions, gold hit all-time highs in Australian dollars in 2019 and we see no fundamental reason why that trend would change in 2020. The RBA has explained publicly that its policy is to reduce the value of the currency, but that does not mean you need to play along.

Gold competes in the investment markets with bonds and shares (and other investments). Bonds pay little or no interest today and rates are at 500-year lows, so it would seem that the $38 trillion bond market is risking a gold substitution trade.

Some of us have been around long enough to remember a rising interest rate environment, when bonds were called “certificates of confiscation”. If bonds pay you no interest, and you risk an erosion of your principal if rates drift upwards, and the currencies that bonds are denominated in confiscate your buying power over time, will more savers and capital preservation investors move from bonds to gold? We think they will.

The 9-year bull market in shares, driven almost entirely by share buybacks that reduce the number of shares outstanding (causing the price per share to rise), is now officially the longest equity bull market in history. We think one nagging fact should temper the bulls’ enthusiasm: corporate earnings are at exactly the same levels they were at in 2014 but share prices are now 70% higher.

Investment markets are funny, however; if we were talking about cars or TVs, people would go on a buyer’s strike after a 70% price hike. Those of us who favour a metal that is 25% denser than lead tend to be believers in gravity, but it’s not clear that 2020 (an election year) will be the year when gravity re-asserts itself in the share market. We may have to wait a little longer.

On the geopolitical side gold’s role as a safe haven has come to the fore as tensions have mounted in the Middle East and elsewhere. These tensions peak and plateau, but even the plateau levels seem elevated these days so we believe geopolitics will continue to be supportive of even higher gold prices going forward.

On the price action front we’re seeing a replay of 2017-2018 when the bullion banks worked feverishly to defend the $1200 (USD) price level. They failed. The recent price action sees them trying to defend the $1500 price level, and despite throwing more than 100,000 short Comex futures contracts at gold since last May to try to stem the metal’s rise, they do not seem to be having any more success defending $1500 than they did defending $1200.

It’s worth recalling that savers and investors who choose gold as an alternative to bonds or shares will be competing for an exceedingly rare metal whose miners already venture up to 10,000 feet underground seeking minute amounts of it to sell. Despite these heroic and expensive efforts by miners the global supply of gold increases by a mere 1.6% per year.

So given the parlous state of money markets outlined above and the immovable fact of gold’s scarcity, we think there is a non-zero chance of a very asymmetric outcome for those lucky and smart enough to own gold: that they wake up one day to find an offerless market where gold gaps dramatically higher.

One analyst we respect (Jim Rickards, a contact and colleague of ours here at SendGold) has an upside price target of more than USD $5,000 per ounce or possibly even more.

Our strategy in 2020 for the world’s premier precious metal, with its finite supply dictated by the laws of physics and not the whims of politicians or central bankers or corporate treasurers, can be summarised in one word: “accumulate”.

We’ll be rolling out exciting changes in SendGold in the coming months that we think will make SendGold your preferred option as you continue to accumulate history’s most reliable investment asset and one of the best hedges against political and market uncertainty.

Keeping our Clients Informed About Gold

Download our new App now and BUY 100% title to GOLD in minutes.