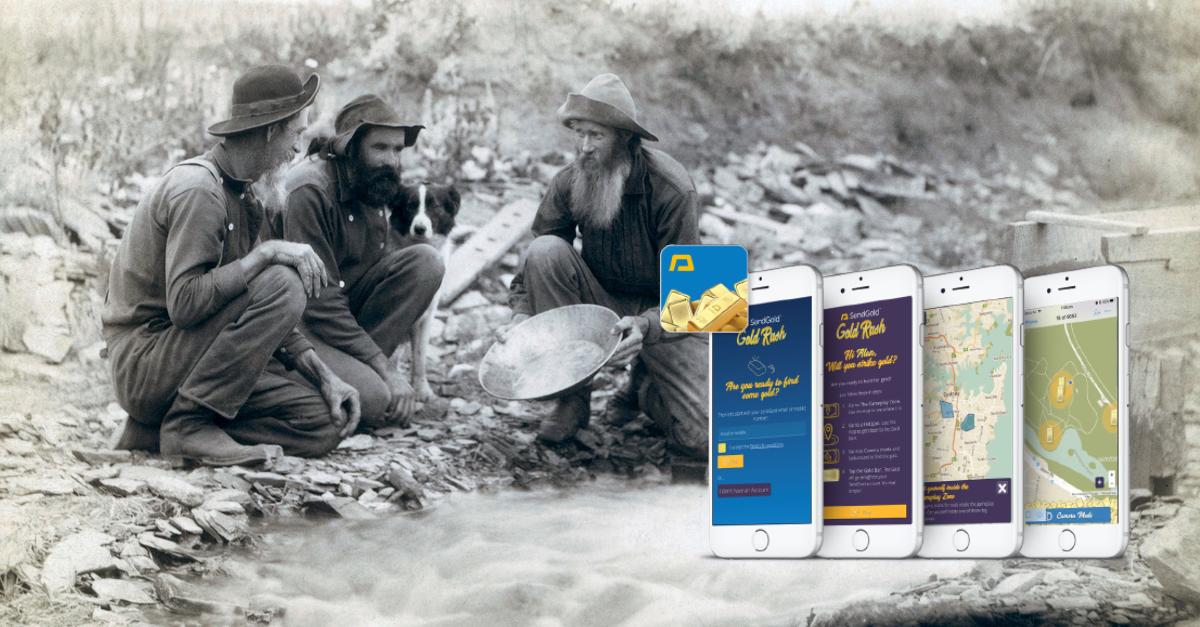 Our Gold Rush game merges investment, payments, and gameplay in a to supercharge our marketing strategy.

During the holiday period, dozens of Australians in cities and towns went running around their local parks, finding bars of gold using just their mobile phones. They were playing “Gold Rush by SendGold”, our new app inspired by the wildly successful Pokémon Go game.

SendGold fuses augmented reality, investment, peer-to-peer payments, and geo-location into a single fun way you can add to your own pot of gold.

As our CEO Jodi Stanton notes, “Not only are SendGold customers early technology adopters, but we also know that once they have even a small amount of gold in their SendGold account they immediately appreciate the simplicity and accessibility of the app. Our challenge was to find a cost-effective, viral campaign to get those small gold amounts into the hands of millions of people worldwide without big advertising budgets or setting up offices around the world on day one.”

Learning quickly from the best

Motivated by the success of Pokémon Go – the quickest game in history to reach an audience of 50 million players – our team decided that a geo-location and augmented reality-based game would be an efficient way to introduce people to SendGold. We set about adapting our back-end systems, developing some proprietary Google Maps extensions, and building out the augmented reality game itself. The result is the Gold Rush by SendGold app and a platform that enables us to run Gold Rush events by placing timed gold bars of any size at any GPS location in the world.

Major banks and financial services companies have recognised that “gamifying” financial transactions can make them simple to understand, engaging, and fun for their customers. According to a 2017 Deloitte study, “gamified” financial apps are used 37% more frequently, resulting in 22% more registrations, and generating 17% more revenue than traditional banking apps.

“For us, it’s like having an instant, physical local presence with our product” said Stanton, “since we can now micro-target promotional drops right into a specific town, onto a specific street, or even into someone’s living room anytime and anywhere in the world. It’s early days for us but this is a terrific marketing tool with capabilities that we can extend as we grow.”

Internationally-recognised and awarded mobile games and social media expert Jennifer Wilson pointed to the blurring of lines between the real world and virtual worlds. “With gaming machines embracing virtual reality and with augmented reality shopping experiences leading to real-world purchases, digital and real-world transactions are starting to cross over. Adding to this, Gold Rush provides a real-world reward that’s obviously  more valuable than an extra life or some extended playing time in a game.”

How to play Gold Rush

During a live Gold Rush event players who are inside the gameplay area will see gold bars on the Google map of their local area. When they move close enough to the location of a bar, it will then appear within the phone camera display. Tapping the bar on the screen (before somebody else does!) instantly transfers the quantity of gold bullion to their SendGold account. The gold is theirs to keep, send to a friend as a payment or gift, or cash out anytime.

So instead of just capturing virtual animals like Charmander and Jigglypuff as one would with Pokémon Go, Gold Rush players are rewarded with real gold bullion. We have plans to extend the Gold Rush game to replicate the real-world gold mining business, including exploration, mine production, and of course real gold as the reward.

We held the first public beta of Gold Rush at last year’s Startcon conference and the reaction was very positive but there were quite a few bugs still left to iron out. We took these learnings and ran an Australia-wide Gold Rush in December 2018 for our hundreds of shareholders. Gold bars worth between $1 and $250 appeared over a weekend at hundreds of locations dotted around the country. Now we’re ready to take Gold Rush to a much wider audience as we continue to launch in new countries around the world. We’ll be announcing the dates and locations of these upcoming Gold Rushes on our website.

Gold Rush leverages our “Gold-As-A-Service” architecture, which we use to push gold transactions via API into third-party platforms like loyalty and gaming. We’re already rolling out a few major partners in both of these domains, including Global Rewards Solutions, the world’s largest cloud-based loyalty platform with blue-chip corporate customers around the world, and GMG Global, who will sponsor their own white label Gold Rushes to promote their games to their millions of users across Asia.

Our company is all about helping our customers accumulate history’s most reliable investment asset, and we see no reason why that should be difficult or boring to do. So stay tuned for more SendGold innovations that will make our service simpler, faster, and (in the case of Gold Rush) even more fun.